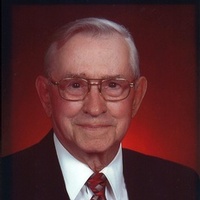 Roman was born on February 12, 1917, on the Michels family farm southwest of Munich. His parents were Hubert and Katie (Athmann) Michels, and he was the seventh child in a family of twelve. He attended Munich Public School, graduating in 1935. He lost his dad in March of that year. Roman worked on the family farm, and on November 10, 1942, he married Muriel Thielen of Clyde whom he met at rollerskating. They farmed three miles southeast of Clyde. Roman was the assessor for Bruce Township for many years and, also, was president of the Clyde School Board. He held that position until their only child, Virginia, graduated in 1964.

In 1964, he and Muriel moved to Langdon, and he worked as a bartender for the Rainbow Lounge, Embers, and Eagles Club. He was then employed by the ABM missile program in both Nekoma and Concrete. He retired in 1988, and he and Muriel spent seven winters in Mesa, AZ. Roman took up golf when he was in his 70Ã¢â‚¬â„¢s and enjoyed it very much, playing daily during the summer. He was always an avid pinochle player and spent a lot of time doing so especially during the winter months.

Roman lived alone in Langdon following MurielÃ¢â‚¬â„¢s death on December 23, 2005. He made several trips to Washington state to visit Virginia and family. He became a resident of Maple Manor on May 1, 2017. He was a member of St. Alphonsus Church as well as being a charter member of the Eagles Club and the Devils Lake Elks.

Surviving Roman are his daughter, Virginia (Doug) Doescher and grandsons Grant and Brandon Doescher- all of Auburn, WA; brother-in-law Lawrence Thielen of Mandan, ND and many nieces and nephews. Along with wife Muriel, he is preceded in death by his parents; brothers: Norbert, Alphonse, Walter, Arthur, and Edwin; and sisters: Annie Schommer, Lena Nosbusch, Eleanor Schuler, Veronica Schuler, Mathilda Weber, and Regina Hoffmann.

Mass of Christian Burial will be held at 10:30 a.m. on Saturday, December 30, 2017, at St. Alphonsus Parish Center in Langdon. Visitation will take place one hour prior to service time at the center. Burial will be at Calvary Cemetery.

Visitation will take place one hour prior to service time at the St. Alphonsus Parish Center.

Visitation will take place one hour prior to service time at the St. Alphonsus Parish Center.

To order memorial trees or send flowers to the family in memory of Roman Michels, please visit our flower store.