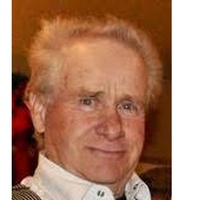 Robert Wesley Ullyott was born to Russell and Verna (Welsh) Ullyott on December 16, 1939. He grew up on the family farm and attended school in Harvey Center. In 1960, he joined the Army and was stationed in Okinawa. After leaving the service in 1962, he returned to Langdon and began farming. In 1967, he was married to Gaylene Florence. They made their home on the family farm and raised 6 children.

Bob was a man full of life, quick with a joke, song or even a poem! He also loved to travel. He would drive across the country for numerous fun-filled family vacations, 49 states in allÃ¢â‚¬Â¦and fishing trips throughout most of Canada.

A voracious reader and lover of history, Bob had a curious mind and was interested in all facets of life. He would consume books and become an expert on whatever topic would be peaking his interest at the time.

He was a family man and a farmer. In 1974, Bob received the Outstanding Young Farmer of the Year Award. However, his career in farming began long before that. He started helping his father with the family farm when he was a small boy. Growing up, he would often be found helping out with the neighborsÃ¢â‚¬â„¢ farms. This generosity for others would be a common theme throughout BobÃ¢â‚¬â„¢s life.

A hard worker all his life, he would begin his day long before the sun rose and would end long after it had set. During the winter months he could be found in the shop tearing down and rebuilding engines when not hauling grain. There was nothing he couldnÃ¢â‚¬â„¢t fix. In the late 80s, he installed a seed plant and began cleaning and selling seed.

Later in his life, Bob loved spending time with his 14 grandkids - entertaining them with tractor rides, ranger rides and impromptu driving lessons. The past few years Bob enjoyed planting a large garden in which he took much pride.

Unlike most, retirement was never a thought in BobÃ¢â‚¬â„¢s mind. He loved farming and all the work that came with it. He continued on when most would have long given up, and he always made sure the work got done.

Bob is survived by his wife of 51 years, Gaylene; children: Randell (Jolene) of Langdon, Darin of Langdon, Kristi (Rod) Gellner of West Fargo, Wendy (Robbie) Lorenz of Langdon, Justin (Cassie) of Langdon, and Morgan (Matt) Geddes of Langdon; and grandchildren: Jordyn, Peyton, & Keaton Ullyott, Spencer, Sidney, & Savannah Ullyott, Jack, Howard, Rose, & Olive Gellner, Nora, Finn, & Henry Lorenz and Nettie Geddes. He is also survived by many nieces and nephews. He is preceded in death by his parents, Russell and Verna Ullyott, sisters Francis and Lila, and brothers Allen and Dean.

Funeral service will be held Tuesday, August 21, 2018, at 2:00 p.m. at the Langdon United Methodist Church in Langdon, ND. Visitation will be held at the church for one hour before the time of service. Burial - Harvey Centre Cemetery, rural Langdon, ND.

Visitation will be one hour prior to service time at the church. Burial - Harvey Centre Cemetery, rural Langdon, ND.

Visitation will be one hour prior to service time at the church. Burial - Harvey Centre Cemetery, rural Langdon, ND.

To order memorial trees or send flowers to the family in memory of Robert W. Ullyott, please visit our flower store.