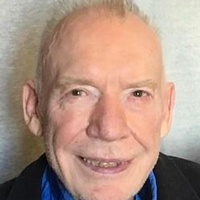 Robert (Bob) Frederick Olafson, age 82, passed away on January 26, 2018 at Eventide in Fargo. Bob was born April 14, 1935 at the Olafson farm in the area called Eyford, Thingvalla Township. His parents are Valdimar (Valdi) Franklin Olafson (1898-1981) and Lovisa Gudlaug (Louise) Jonasson (1914-1999) who farmed at the Olafsson homestead. Bob graduated from the Gardar High School. He worked on the Olafson and Jonasson farms and created Olafson Brothers Construction Company. He is the second oldest of eight siblings.
On June 5, 1959, he and Betty Ann McDonald of Cavalier were united in marriage at Our Savior Lutheran Church in Cavalier.
Over the years, Bob worked tirelessly for Olafson Brothers in farming and construction. He enjoyed airplanes and built many model airplanes and heavy construction models through the years. He had a private pilot license for many years. Bob and Betty retired to Fargo in 1994.
Bob was predeceased by his parents, his sister, Donna Elaine in 2012, three siblings who died when young; Donald Wayne, Karen Elizabeth, and Linda Darlyne, and two nephews Jeffrey Alan Sapa who died young and Brian Lee Olafson in 1994.
Left to mourn the loss is his devoted wife of 58 years, Betty and their three daughters, 1. Sunna Pam (Jeff) Furstenau and grandchildren Macey (Matt) Andvik and Cody (Caitlin) Furstenau all of Fargo; 2. Brenda (Rock) Messerschmidt of Fargo and grandchildren Nichole (Jon) Kearns of Grand Forks, Kayce (Gabe) Halley of Fargo; 3. Barb (Keith) Aasen of Bismarck and grandchildren Krissy (Mike) Mooney of Fargo and Zach of Bismarck. There are fifteen great-grandchildren who also survive. Siblings who survive: Dean, Roger (Marilyn), and Curtis (BjÄ‚Â©Â¶rk) all from rural Edinburg as well as nieces, nephews, and many extended family members of Bob and Betty.
A memorial service will be held at the Mountain Community Center in Mountain at 11 am, Monday, January 29th with lunch to follow. Interment will occur at the Thingvalla Cemetery after lunch.
Memorials can be made to the Mountain Community Center or charity of your choice.

To order memorial trees or send flowers to the family in memory of Robert "Bob" Olafson, please visit our flower store.