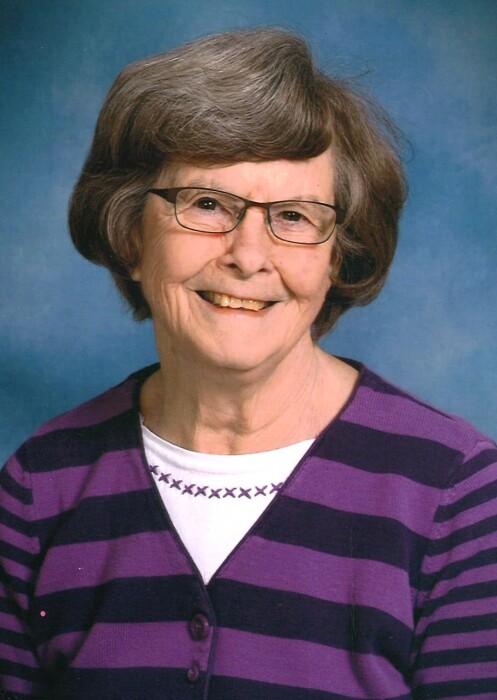 Rita Waslaski, of Langdon, ND, passed away peacefully with her family by her side on March 28, 2021, at Maple Manor Care Center in Langdon. Rita Ann Wright was born in Shaftesbury in Dorset, England, on March 31, 1937, to Edwin and Mabel (Woods) Wright. Rita was the eighth of nine children. She attended school in Shaftesbury and had many jobs in her teen years: made gloves at a factory, was a nanny, and worked in the movie theatre. Rita and Benny Waslaski were united in marriage on April 16, 1955, at Shaftesbury and lived there until December of 1955 when Benny was honorably discharged from the Air Force. They then returned to the Langdon, ND, area. Rita and Benny were blessed with a daughter, Anita Ann; a son, Terrence John; and another daughter, Sandra Marie. Rita babysat when her children were young and managed the Ramage Motel. Her favorite job was doing hair care for the residents at Maple Manor for 32 years. She loved to make pies for her family and enjoyed doing yard work. If there was a child close by, Rita would be there as she loved kids. Rita was a member of St. Alphonsus Church and Altar Society. Surviving Rita are her children: daughter Anita Fischer of Lakewood, CO, and son Terry of Spokane, WA; grandchildren: Janelle (Mike) Van Meegren, Bryan (Sarah) Fischer, Bryce Fischer (Hannah Bakke), Ashlee Waslaski, Jake Waslaski (Jade Adair), Ben Waslaski (Payton Maas); great-grandchildren: Teah Fischer, Langdon Fischer, Sandra Waslaski, Oliver Waslaski; brother John Wright; sister Brenda Hunt; and sisters-in-law: Shelia Wright and Audrey Waslaski. She was preceded in death by her parents; husband Benny; daughter Sandra; and siblings: Flo, Mary, Dora, Myrtle, Qwen, and Ronald. Mass of Christian Burial will be held at 1:00 p.m. on Thursday, July 8, 2021, at St. Alphonsus Catholic Church in Langdon, ND. Inurnment will be at Calvary Cemetery in Langdon.
To order memorial trees or send flowers to the family in memory of Rita Waslaski, please visit our flower store.