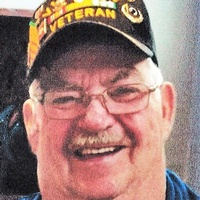 Raymond Lawrence LaChapelle, Jr. at the young age of 69, passed away on Friday, November 23, 2018 at Altru Hospital in Grand Forks, ND. Ray was the 4th of 6 children born to Claudine (Flaten) and Ray Sr. LaChapelle on the 8th of September, 1949 in Mayville, ND. As a Portland Pirate he enjoyed and saw success in football, wrestling and making friends. After graduation in 1967, Ray went to Kansas to work construction. He returned home in 1967 to enlist in the Army. After boot camp at Fort Lewis Washington, Ray was sent to Viet Nam to serve our country. He had graduated from Paratrooper School in Fort Bening, GA and was part of the Army Airborne. He returned 1968 and continued to serve at Fort Ryle, Kansas for a year.

Ray graduated from Fergus Falls Jr. College before returning to the Portland area. On New YearÃ¢â‚¬â„¢s Eve, 1975 he met his future wife, Ila Thompson. They married August 14, 1976 and continued to live the Mayville - Portland Area until moving to Walhalla in 2001. In early February 1983 their son, Scott David, joined them to make their family unit complete.

As everyone who knew Ray would agree, he was definitely a Ã¢â‚¬Å›people personÃ¢â‚¬Å¥. He was always happiest when laughing, singing, and visiting with friends and family. He loved changing strangers into friends. One of his greatest passions was fishing, not necessarily for the fish itself but for the fellowship with friends and bragging rights that were sometimes earned. Deer hunting was a favorite time to spend with friends and family. Ray was active in 3454 Eagles Club in Mayville, KEM Temple Shrine in Grand Forks, Goose River Lodge 19 Masons due to Don Evans guidance, Life time member of Mayville VFW, Lifetime member of Viet Nam Veterans of America, Portland American Legion.

Ray was preceeded in death by his parents and older brother Duane. He is survived by his wife (Ila), son (Scott), brothers: Darol (Kathy) and Robert (Sandy); sisters: Renee (Brad) Amundson and Diane (Richard) Onstad. He also leaves behind nieces Carie Onstad and Natasha Haugen and nephews Brad Amundson Jr., Chad LaChapelle and Michael LaChapelle. Others that he leaves behind are in-laws, cousins, aunts, uncles and dear friends like his chosen brother, John Jacobson. Ray will be missed by ALL who knew him.

To order memorial trees or send flowers to the family in memory of Ray L. LaChapelle, Jr., please visit our flower store.