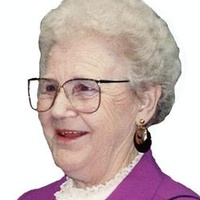 Nora G. Romfo, 93, of Walhalla, ND passed away Thursday, February 8, 2018, at the Pembilier Nursing Center, Walhalla, ND. Funeral service will be held Tuesday, February 13, 2018 at 10:30 a.m. at the Walhalla Lutheran Church, Walhalla, ND. Visitation at the church for one hour before the time of services. Burial will be held in the Vang Cemetery.
Nora Grace Jore was born February 9, 1924 at Union, ND to Gilbert and Netta (Anderson) Jore. She grew up in the Union area where she attended school. Nora worked for various farm families in the Union and Vang areas. On August 9, 1944, she married Orvin Romfo. After their marriage they farmed in the Vang area. In 1976, they moved into Walhalla.
Things she enjoyed were quilting, gardening, and canning. She was active in the Walhalla Senior Citizens and the Walhalla Lutheran Church.
She is survived by her children: Carol (Gary) Jourgensen and Clayton (Karen) Romfo, all of Casper, WY; grandchildren: Brian, Nicole, and Scott Cooper; Melissa Nowicki and Christopher Romfo; four great-grandchildren; three great-great-grandchildren; brother, Thelmer (Belle) Jore.
Preceding her in death were her parents; husband, Orvin; grandson, Daniel; great-grandson, Michael; great-great grandson, Ryan; seven brothers and three sisters.

To order memorial trees or send flowers to the family in memory of Nora G. Romfo, please visit our flower store.