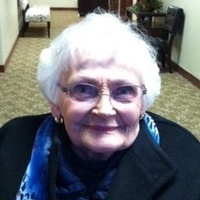 On September 24, 1949 she was married to H. Dennis Nelson. They made their home in Walhalla where they owned and operated Nelson Funeral Home until Dennis passed away in 1986. Molly remained in Walhalla until moving to Fargo in June of 2011. She has resided at the Villa Maria care center since.

Molly was a member of St. Boniface Catholic Church of Walhalla as well as many church & community organizations through the years.

Prayer Service: Thursday evening at 7:00 P. M. at the church

Online condolences may be shared at nelsonfuneralhomesnd.com

To order memorial trees or send flowers to the family in memory of Muriel "Molly" Nelson, please visit our flower store.