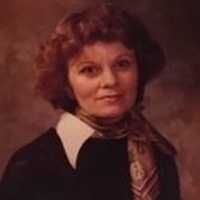 It is with great sadness that the family of Maureen Askew announces her passing on October 25, 2018 at her home in Cavalier, ND. She was 84 years of age.

Francis Maureen Jenson was born in Neche, ND on October 24, 1934 to Harold Jenson, Sr. and Marguerite (Nevens) Jenson. A true character since her early years, Maureen was one-of-a kind. Strong, determined, and deeply caring, she made an impression wherever she went and to everyone she met. She would grow up to graduate from Neche High School and married Russell Askew upon his return from the Korean War. She raised two beloved children and doted on her four grandchildren and one great grand-child.

You could often find Maureen in her backyard (most likely with a cat on her shoulder), meticulously tending to the flowers and plants in her gardens. With her God-given green thumb, it brought her great joy to nurture and grow her beautiful arboretum, for which she was well known and praised throughout the area.

Her story would not be complete without mention of her profound love and compassion for animals in need, most notably, stray cats in the area. The constant stream of Friskies, milk, and a heated cat-sized refuge house in the backyard, guaranteed a stop by felines without a home.
Maureen had a razor-sharp wit and filled the lives of those closest to her with sarcastic humor and a generosity that knew no bounds. She was fiercely loyal and overflowed with pride for her family, showing insurmountable devotion and love, and making sure each one knew they were her Ã¢â‚¬Å›starÃ¢â‚¬Å¥. She was an avid Bison fan and was especially proud when her son, Mark, played football for NDSU and daughter, Robin, was a baton twirler in the Gold Star Marching Band.

She will be deeply missed and has left an irreplaceable mark on loved ones who survive her including her devoted husband of 66 years, Russell Askew of Cavalier; loving children, Mark Askew (Lisa) of Fargo; Robin Jenkins of Warrenton,VA ; sister Evelyn Borg of International Falls, MN; grandchildren Brandon Askew (Kayle) of Fargo; Brittany Askew of Fort Worth, TX; Cody Jenkins (Kelly) of Red Feather Lakes, CO; Boomer Jenkins of Fairfax, VA; and great-grandchild, Laken Askew of Fargo, ND. She is preceded in death by her parents, Harold Jenson, Sr. and Marguerite Jenson, three brothers and three sisters.

There will never be another Maureen Askew. A unique blend of beautiful, strong, loyal, and lovable, she is truly unforgettable. She was remembered at a small, private family service on Monday, October 29, 2018 in Cavalier, ND. Any memorials are requested in the form of donations to the Humane Society of the United States (1255 23rd Street NW, Suite 450, Washington DC 20037) or by adopting an animal in need of a loving home as this is how Maureen would have wanted it.

Condolences may be sent to Russell Askew, P.O. Box 266, Cavalier, ND 58220.
To order memorial trees or send flowers to the family in memory of Maureen Askew, please visit our flower store.