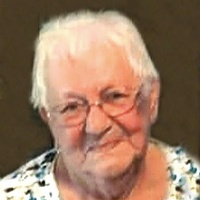 Marlene J. Johnson, 84, of Pembina, ND passed away Tuesday, April 17, 2018 at her home. Funeral service will be held Sunday, April 22, 2018 at 2:30 p.m. at the Pembina Pioneer United Methodist Church, Pembina, ND. Visitation at the church for one hour before the time of services.

Marlene J. Rutherford was born August 11, 1933 at Hines, MN to Cecil and Anna (Gooselaw) Rutherford. She moved to St. Vincent, MN at the age of nine. In 1951, she graduated from Pembina High School.

On March 8, 1954, Marlene married John C. Johnson at Hallock, MN. They lived in Pembina where they raised their family. She enjoyed fishing and spending time at Lake of the Woods. Spending time with her grandkids and great-grandkids was very precious to her.

She was a member of the Kern-Thompson Post #77, Pembina American Legion Auxiliary for 64 years and the Pembina Order of the Eastern Star.

She was preceded in death by her husband, John, parents, Cecil and Anna, step-father, Robert Rondeau,and sister, Celia Ã¢â‚¬Å›SallyÃ¢â‚¬Å¥ Bouvette.

To order memorial trees or send flowers to the family in memory of Marlene J. Johnson, please visit our flower store.