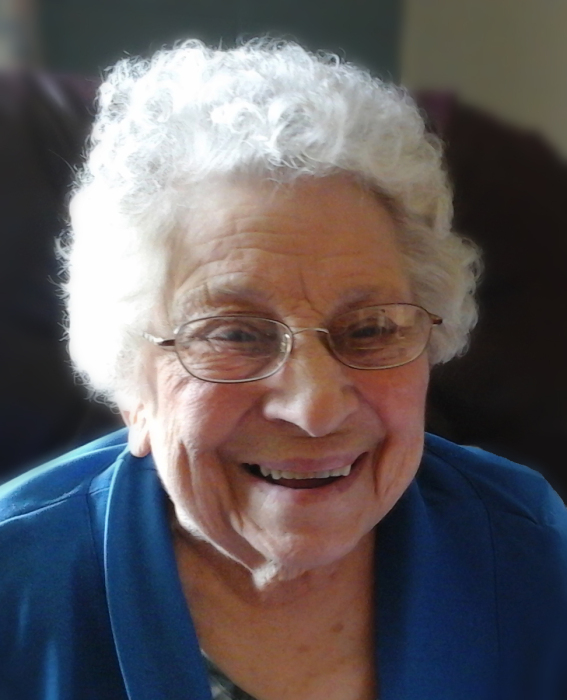 Marjorie (Soli) Jacobson, 95, of Langdon, ND, died peacefully February 6, 2021, at Maple Manor Care Center, Langdon, ND.  A memorial service will be held at 2:00 p.m. on Friday, February 12, 2021, at United Lutheran Church in Langdon.  A visitation will be held from 4:00 p.m. to 6:00 p.m. on Thursday, February 11, 2021, at the church. Mask wearing and social distancing are highly recommended. A webcast of the service can be viewed on the funeral home website following the service. Burial will be in the summer in South Pembina Lutheran Cemetery, rural Langdon, ND.

Marjorie (Marge) Kathleen was born on March 20, 1925, to Thorsten and Mathilde (Bode) Soli in Vang, ND, where she grew up and attended elementary school. Marjorie attended high school in Twin Valley, MN, where she graduated as valedictorian in June of 1943. While attending high school in Twin Valley, she lived with her maternal aunt, Laura Erickson. Following high school, Marge worked for a time at Bell Telephone in Fargo where she shared rooms with Gloria Jacobson. That is where Marge met her future husband, Floyd Jacobson, Gloria’s brother.

Marjorie and Floyd were married in Vang on June 28, 1947. Marge and Floyd lived in Walhalla and moved to Portland, Oregon, in 1948. There, Marjorie did secretarial work in the offices of the Hyster Company. The couple returned to Cavalier County in 1949. In 1951, they moved to Stillwater, MN, where they lived and worked until 1960. Marjorie worked as a payroll clerk at Minnesota Mining and Manufacturing while Floyd worked as a carpenter.

In 1960, Floyd and Marjorie returned to Cavalier County and built a home at Mona, in Loam Township, where she baked, decorated and sold wedding cakes. Marjorie and Floyd bought Langdon Floral from Alice Power in 1967. Marjorie operated the business in three locations in downtown Langdon for the next 31 years. She retired in 1998.  Floyd died in October of 1973. The Grand Forks Herald featured Marjorie’s retirement in their business section, recognizing her accomplishments as a business leader in the region.

In retirement Marge became an avid and accomplished quilter and served on various committees at United Lutheran Church where she was a long-time member. She enjoyed reading, watching Olympic figure skating, baking, and keeping up with her grandchildren and great-grandchildren. Her passport was stamped in England, Norway, Korea, Singapore, Switzerland and Canada. She was happiest when she hosted family gatherings. She had a gift for hospitality and welcomed whomever showed up at her table. She simply added more plates and pulled up a few more chairs. Her family joked that she could, without notice, feed a small army from the contents of her pantry’s lazy Susan.

Memorials can be directed to the following:

American Diabetes Association - their website is  https://www.diabetes.org/ - donate button is in the right hand corner.

To order memorial trees or send flowers to the family in memory of Marjorie Jacobson, please visit our flower store.