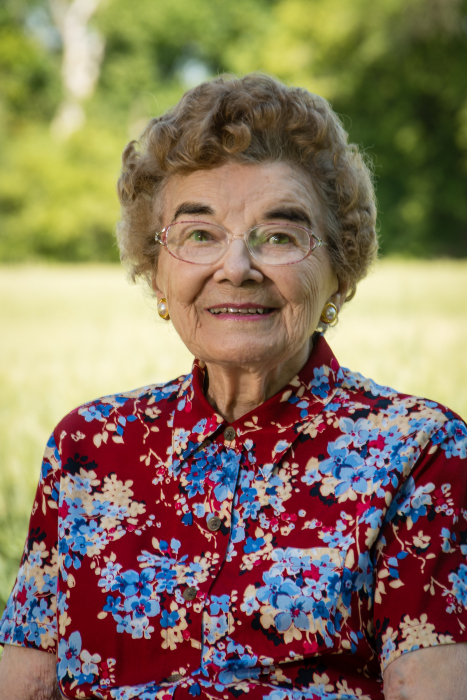 Marion Arlene Hove, beloved wife, mother, grandmother and great-grandmother passed away Sunday, June 15th, 2020, at Parkwood Senior Living in Grand Forks with her family by her side.

Marion Arlene Wiken was born December 28, 1927 in Grand Forks, ND, the daughter of Arnt and Margaret (Amble) Wiken, where she grew up and attended school, graduating from Central High School in 1945. She was baptized and confirmed in Sharon Lutheran Church. She attended the University of North Dakota for 3 1/2 years. She taught school in Fairdale for one year and Bathgate for four years.

Marion was united in marriage to Howard Hove at the Sharon Lutheran Church in Grand Forks on June 22, 1952. The couple lived in Sacramento, CA until 1954, when they returned to North Dakota to reside on the Hove homestead farm. They established Hove Construction Company. Marion was actively involved with the business as a bookkeeper. She was also the bookkeeper for the family farming operation until April of 2020. Marion taught school in the Osnabrock Township Consolidated School for two years in the late1950's. She found great joy in the education of her students and loved sharing fond memories of her students, whom she remembered all by name. Marion & Howard also built a trailer court in 1970 during the ABM construction, which they eventually incorporated into a city called "Hove Mobile Park City".

Marion and Howard have two sons: Michael (Brenda) of Bismarck and Mark (Ingrid) of Grand Forks. Marion enjoyed the lives and interests of her four grandchildren: Matthew, Benjamin, Erik and Brooke.

Marion was a member of Highland Lutheran Church, rural Fairdale, until it was closed in 1976, and since then an active member of Dovre Lutheran Church in Osnabrock, serving on the stewardship committee, call committee, WELCA offices, and as a voting delegate to the Eastern North Dakota synod assembly. She has taught Sunday School and Vacation Bible School. Marion was also a delegate from the Grafton Conference to the National Convention of the American Lutheran Church, held at San Diego, CA in 1982.

Marion and Howard were active with the Lutheran Brotherhood Branch officers for 26 years. They were members of the Century Club at the Park River Bible Camp and did volunteer work there, including working at the annual Lutefisk & Meatball Dinner. Howard passed away in 2009. Marion also served on the Cavalier County Library Board for seven years.

Marion enjoyed a very active and full life. She will be deeply missed by her loving family and many cherished friends.

Visitation will be on Tuesday, June 23, 2020, from 5:00 to 7:00 P.M. with a prayer service at 7:00 P.M. at Brooks Funeral Home of Langdon and will continue for the hour before the service in the church on Wednesday. Services will be held at Dovre Lutheran Church in Osnabrock, ND, on Wednesday, June 24, 2020, at 1:00 P.M. followed by a lunch at the Barley Hall in Osnabrock. Social distancing and masks are encouraged. Burial will be at Highland Lutheran Cemetery, rural Fairdale, ND.

To order memorial trees or send flowers to the family in memory of Marion A. Hove, please visit our flower store.