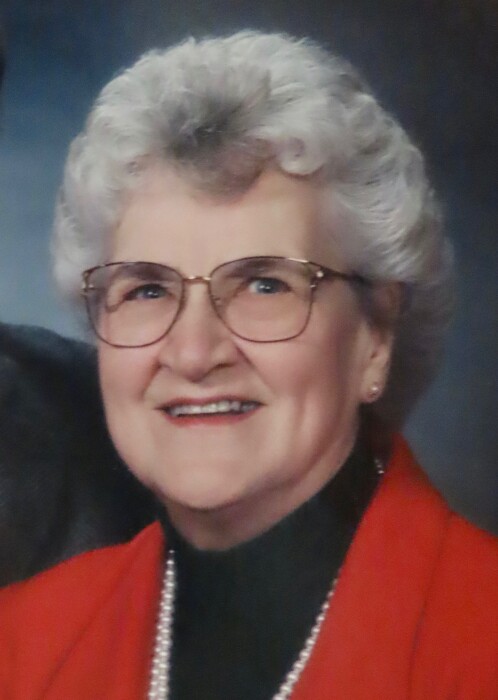 Marion Kathleen (née, Erickson) Enerson was born on January 13, 1923 at her grandparent's farm house near Ross, Minnesota.  Her parents, George S. Erickson and Clara D. (née, Haaby) Erickson, were children of Norwegian immigrants who raised their seven children on a dairy farm outside of Roseau, MN.  Marion was their first daughter and second child.  She graduated from the Northwest School of Agriculture, a residential high school in Crookston, MN.

After high school, Marion was trained as a sheet metal worker at the Northwest Airlines modification center in St. Paul, MN where B-24 Liberators were modified for wartime use.  She then enlisted in the Women's Army Air Corp where she served as a radio transmitter technician in Colorado Springs, CO.

After the war, she went to beauty college in Grand Forks and in the summer of 1946 met Clarence (Bud) Enerson when she stopped at Frank White's garage in Hamilton for gas.  They married on December 22, 1946 at her parent's farm, and celebrated their 65th wedding anniversary in December 2011.

According to her children, Marion cooked a great pot roast, baked the world's best cinnamon rolls and canned peaches, pears and other fruits and vegetables every summer.  She sewed dresses for her girls, took meals out to the field and hauled grain during harvest.  She fixed the hair of many Hamilton ladies.  She was proud of her old house and was constantly rearranging furniture.  She took pleasure in her grandchildren and their activities, kept a diary for over 50 years and kept scrapbooks of Hamilton news. She did crossword and Jumble puzzles.  She was an active 4-H leader and a member of Presbyterian Ladies Aide, Progressive Homemakers and Eastern Star.  She got online 35 years ago and until the last few months followed her grandchildren's activities on Facebook. She had little fear and trusted in her Lord.

Marion worked at the Pioneer Rest Home in Bathgate for many years and later as a nurses' aide at Pembina Country Memorial Hospital.  She liked helping people and enjoyed the company of her co-workers.  She has lived at Wedgewood Manor in Cavalier since 2015.

Marion was preceded in death by her daughter Marcia, who died on February 29, 2012, and her husband, Bud, who died November 6, 2012.  She is also predeceased by her brothers Everett Erickson and Donald Erickson and her sister Vivian Dvergsten.

Her family would like to thank her kind caregivers and attentive staff at Wedgewood Manor, where she took great pleasure in BINGO, especially if she won!

Marion was still waiting to see a woman elected President of the United States when she passed away on August 15, 2020, surrounded by her family.

To order memorial trees or send flowers to the family in memory of Marion Enerson, please visit our flower store.