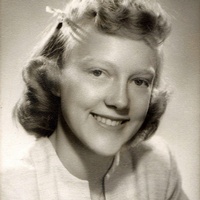 In 1949, Louise married Robert Edward Carlson of Brooklyn, New York. Bob had come to Colorado to learn to ski, but instead found his bride. They lived in Denver and Spokane, Washington, before finally settling Portland, Oregon in 1956, where the last of their three children was born. Active in church and Intervarsity Christian Fellowship Bible studies, hospitality was a very key part of who Louise was, and many young people found a welcome in the Carlson home. Gradually, Bob and Louise became more involved in the working of the Holy Spirit in the Charismatic Renewal Movement, and as their children grew older, the couple reached out through High School Bible studies and young adult ministry, culminating in helping to launch a group of discipleship houses through their Baptist Church in the early 1970Ã¢â‚¬â„¢s that eventually evolved into Bethlehem Community (now situated in Bathgate, North Dakota).

LouiseÃ¢â‚¬â€always artistic and mistress of good dress and decorating senseÃ¢â‚¬â€took up watercolor painting in her early 70Ã¢â‚¬â„¢s despite deteriorating eyesight and limited fine-motor movement. Numerous friends and family members were remembered with her hand-painted cards. Wife, mother, grandmother, sister, mentor, friend, Louise touched the lives of many through her faith in Christ, her gift of praying for healing, her ready hospitality and her fund of wisdom gained through her own struggles. Her love of singing carried herÃ¢â‚¬â€and othersÃ¢â‚¬â€through to the very end.

Louise is survived by her brother Marvin Almquist, his sons Steven and Mark; her three children Raymon Nels, Jean Ann, and Karin Ruth; her 11 grandchildren; her 30 great-grandchildren; and many friends.

The Wake service for Louise is to be held in the chapel of Bethlehem Community of Benedictine Oblates at 7:30 P.M. on October 11, 2018 in Bathgate, North Dakota, with vigil kept through the night. On the following morning, October 12, 2018, the funeral Mass also will take place in Bathgate at 10:30 A.M, followed by Christian burial.

To order memorial trees or send flowers to the family in memory of Louise Carlson, please visit our flower store.