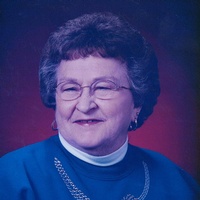 Loretta E. Chaput, 87, passed away peacefully on July 13, 2018, surrounded by loved ones, at the Pembina County Memorial Hospital in Cavalier, North Dakota. Loretta Evelyn Fortin was born June 19, 1931, in Rolette, North Dakota, to Ernest and Alice Fortin. She was joined in marriage to Ron Chaput on May 30, 1951, in Langdon, North Dakota, and the couple had six children.

Loretta was a woman of faith and supported many charities. She also loved to read, knit, crochet, cross stitch, and bake. Her family particularly enjoyed her scotcheroos, Aunt SallyÃ¢â‚¬â„¢s cookies, homemade bread, and cinnamon rolls. Knitting and crocheting were particularly favorite pastimes of hers and she often sent homemade gifts to her family and friends.

To order memorial trees or send flowers to the family in memory of Loretta E Chaput, please visit our flower store.