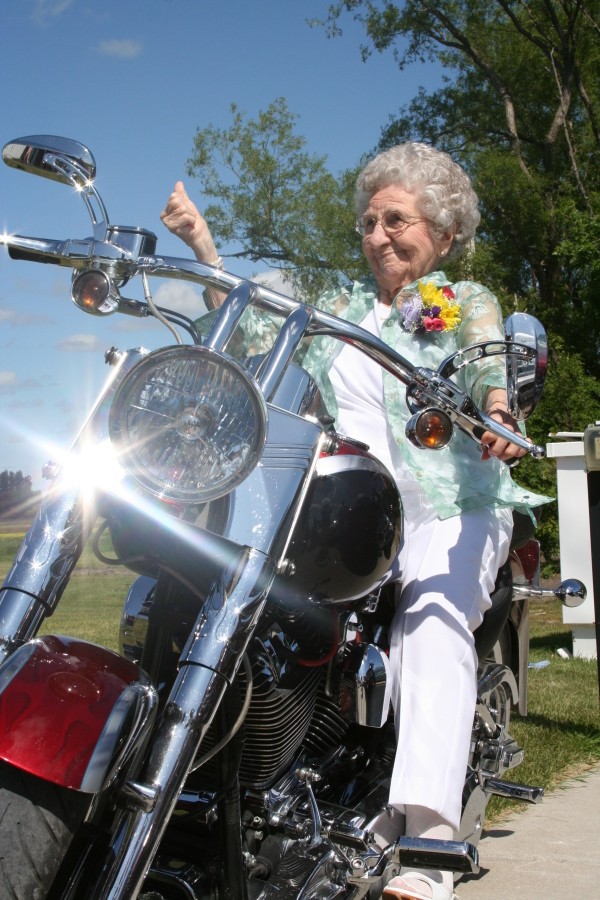 Lois Arleen Flanders Hertzell, known affectionately as Grandma GG, was welcomed home to the arms of our Heavenly Father on Wednesday, March 18, 2020, at the age of 100. She died of natural causes at Cavalier County Memorial Hospital in Langdon, N.D.

Lois was born Thursday, July 17, 1919, in Paynesville, Minn., to Leslie Jay and Alice (Hunter) Flanders. She was the third sibling out of two sisters and one brother. They were raised in Grey Township of Cavalier County in North Dakota, where she graduated high school in three years in 1936. She married the love of her life, Owen Hertzell, with a bouquet of lilacs on June 1, 1938, in Milton, N.D. Their union created four beautiful children — Joyce, Philip, Linda and Patricia.

Lois and Owen lived on a farm south of Calvin for almost 20 years. They moved to Calvin proper in 1965 and then to Langdon, N.D. in 1978. Following the death of Owen in 1982, Lois continued to live independently into her 90s before moving to Wheatland at Maple Manor Care Center.

Lois always had a candy dish and drawer full of lemon drops, gum drops, Andes mints and more. She had a unique ability to listen, make people feel special and never let visitors leave empty-handed. She loved to crochet and made unique afghans for all of her relatives and friends. Her gifts will keep many hearts and bodies warm for the years to come. She liked to listen to Randy Travis, the Grand Ole Opry and play country western gospel or hymns by ear on the piano. She had an affinity for new dishes — especially teacups and saucers — china cabinets and crossword puzzles.

As a symbol of the eternal love for her husband, Lois began her day after Owen’s passing by illuminating a lamp next to his photo and greeting it with a morning hello. She’d end her day turning off the lamp and saying a sweet goodnight to his photo. She followed this ritual for almost 40 years.

The family would like to thank all those who cared for Lois at Cavalier County Memorial Hospital and Maple Manor Care Center. A special thanks to Jan Wild for her support, care and friendship.

To order memorial trees or send flowers to the family in memory of Lois Hertzell, please visit our flower store.