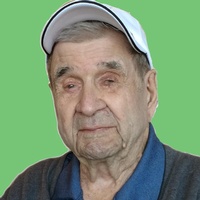 Leo was born June 5, 1918 near Walhalla, ND to Fred and Juliette (Dumas) Verville. He grew up in the Walhalla area and graduated from Walhalla High School. Leo then enlisted in the U.S. Army Air Corp and served in World War II, earning the Bronze Star. On January 7, 1942, Leo married Idamae Morin at Los Angeles, CA. They farmed in the Walhalla area until 1967. He then went to work for the Department of Agriculture as a crop adjuster and later doing federal crop insurance business. After his retirement they moved to Lake Havasu City, NV. Leo had a very inventive nature from which he created many projects. He was also a member of the Knights of Columbus.

To order memorial trees or send flowers to the family in memory of Leo A. Verville, please visit our flower store.