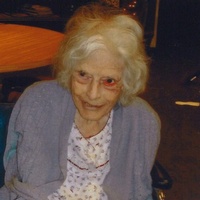 June B. Bauhaus was born December 3, 1911, at Merricourt, ND, to William and Lottie (Otoupulik) Bauhaus. She attended school and eventually went to business school where she took up bookkeeping which was her main profession. June married Richard Westcott on July 14, 1937, in Santa Barbara, CA. They traveled all over the world as Richard was in the US Navy CB. In the summer of 1995, they moved to Langdon to be near their daughter, Teddie, and granddaughter, Lorraine. June enjoyed painting and sewing.

June is survived by her daughter, Teddie Ahlberg, of Langdon, ND; granddaughter Lorraine Gage of Langdon; great-grandchildren: Deelia Guite, Corban Gage, and Wyatt Gage; and great-great-grandchild Gracynn Guite. She was preceded in death by her parents and husband Richard.

No services will be held. Inurnment will be in California.

To order memorial trees or send flowers to the family in memory of June B. Westcott, please visit our flower store.