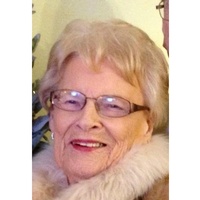 GuÄ‚Â°bjorg (Judy) Bernhoft passed away Saturday, March 23rd at the age of 96. She was born April 14th, 1922, at Mountain, ND, the daughter of Freda Snowfield Einarson and Freeman Einarson. She attended school at Mountain and the University of North Dakota. She worked in Bellevue, Nebraska until her marriage to Orville Bernhoft on December 18th, 1943 in Mountain.

Judy was a member of the Vikur Lutheran (Church) Society and LCW, the Four Season Garden Club, Republican Women, and Pioneer Daughters. Judy and Orville farmed at Mountain until their retirement. They enjoyed traveling to California for 15 years before they moved into Parkwood Senior Living in 2006.

She is also survived by 8 great grandchildren, Julia, Emily, and Molly Stern, Sophie and Drew McShane, and Parker, Kate, Madison and Connor Bernhoft.

She was preceded in death by her husband, Orville, brother Freeman (Stuni), and sisters Freda Stefanson and Effie Stefanson. Also surviving are several nieces and nephews.

Funeral services will be held on Wednesday, March 27, 2019, at 2:00 p.m. at the Vikur Lutheran Church in Mountain. Visitation will be held for one hour before the time of the service at the church.

To order memorial trees or send flowers to the family in memory of Judy Bernhoft, please visit our flower store.