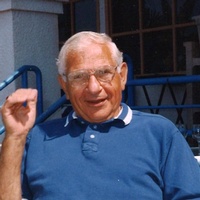 John was born October 25, 1927, in Langdon, ND. After graduating from St. Alphonsus High School in 1945, he enlisted in the US Army. Following his two years of service, he entered St. JohnÃ¢â‚¬â„¢s University in Collegeville, MN, graduating in 1951 with a degree in economics. He then attended the Georgetown University School of Foreign Service, while working for Minnesota Senator Hubert Humphrey. He met his first wife, Joyce Peterson, while they were both working for the Senator. They moved from Washington, DC back to Langdon, where John worked for O.S. Johnson Insurance until he was appointed postmaster in 1964, a position in which he served until his retirement in 1994. After the death of his first wife, he married Arlaine Short of Langdon in 1994.

John was active in the Langdon community, as a founding director of Farmers and Merchants bank and as a member of the Cavalier County Memorial Hospital Board and the Cavalier County Job Development Authority. He was also a charter member of the Langdon Eagles Club Aerie #3454, and belonged to the American Legion, the Knights of Columbus, and the Northern Lights Arts Council.

John was an outgoing, energetic, and friendly man with a gentle manner and a delightful sense of humor. His kind spirit will be greatly missed by his family and friends.

In lieu of flowers, memorials preferred to be sent to St. Alphonsus Foundation or Maple Manor Care Center Foundation.

To order memorial trees or send flowers to the family in memory of John R. Delebo, please visit our flower store.