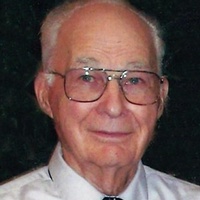 Jackson was born March 10, 1924 to Peter and Mabel (Jenson) Brown in Neche Township near Bathgate, ND. He attended Bathgate Public School from 1st thru 12th grades. Upon graduation he attended Wahpeton School of Science taking courses in agriculture, welding and drafting. He returned to the homesteaded farm on which he grew up on- to be a third-generation farmer.

Jackson married Betty Renwick on June 12, 1951 at Bathgate and they continued farming and living in the Bathgate area until they retired to Cavalier in 1981.

Jackson served as a township supervisor for many years and served on the school board of the Neche Public School. He was active in the Masonic Lodge, Kem Temple Shrine and the Bathgate Presbyterian Church where he served as Sunday School Superintendent for many years.

To order memorial trees or send flowers to the family in memory of Jackson Brown, please visit our flower store.