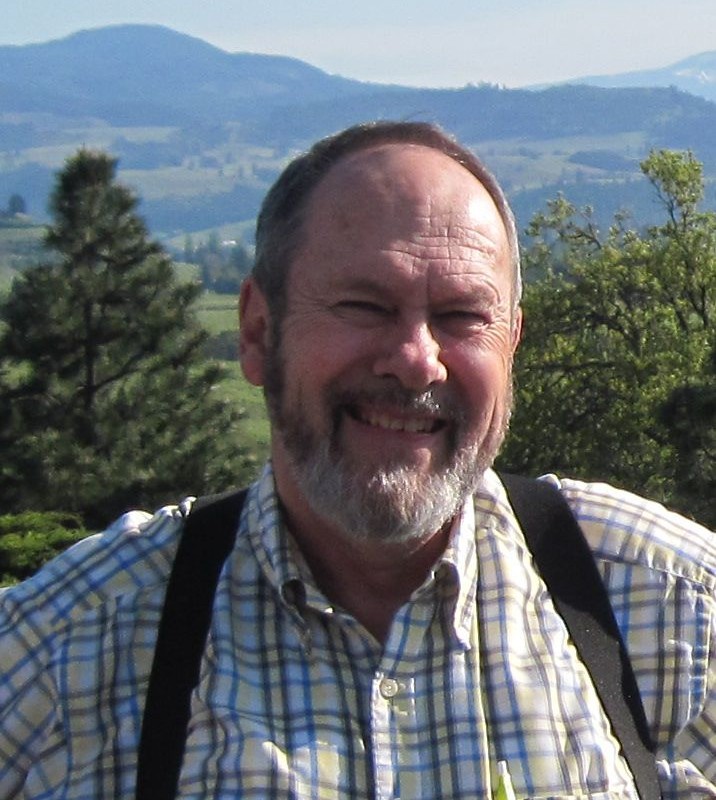 On Sunday, October 23, 2022, Jack died suddenly from a massive heart attack after a serious, but otherwise successful, surgery for bladder cancer. He died as he lived, with a straightforward, willing spirit. The Wake was held in the Bethlehem Community of Benedictine Oblate’s Chapel in Bathgate on October 25th, with family and friends watching through the night. The Mass of Christian Burial was held on October 26th at St. John Nepomucene Catholic church in Pisek, ND, followed by burial in the St. Anthony’s Catholic Cemetery in Bathgate.

Jack was born to Patricia (Hicks) and James Sharpe in Portland, Oregon on April 3, 1951, the oldest of three sons—Jim born in 1952, and Jerry in 1956. He became an Eagle Scout as a teenager, after a boyhood-long involvement in the Boy Scouts. He attended Portland’s Grant High School, graduating in 1969. These years also marked the beginning of Jack’s life-long love of taking children on adventures, kindled by three summers serving as a counselor for physically and mentally challenged children at Mt. Hood Kiwanis Camp. His interest in working with the young was further heightened by his participation in Outdoor School during his first year at Portland State University; an experience, which then led him to pursue environmental studies at Oregon State in the fall of 1970.

In Corvallis, Jack’s plans took a U-turn when the only housing he could get was in a Shiloh Ministries Jesus People house—where he experienced a life-changing encounter with Jesus Christ.  It would take a book to recount just how this timely meeting with God changed and shaped Jack’s life, for the good (and, sometimes, entertainment) of many he met along the way.

On January 18, 1974, he married Jean Ann Carlson; together they shared life with each other, their four children—Peter, Joseph, Roseanne and Nathaniel—and a sometimes changing, but always deepening, group of others committed to ongoing conversion and growth as Christians within a community life.  Bethlehem Community, which evolved from discipleship houses begun around 1971 through their Baptist church, lived in downtown Portland for 15 years. During that time Jack worked with the Community home-school, did Bible studies and park preaching, and helped to start a Scandinavian bakery. In 1992, he spearheaded the launch of Bethlehem Books, a not-for-profit publishing outreach that reprints hard-to-find books for children and families.

In 1993, Jack, along with many members of the Community, entered the Catholic Church. The Community members became Oblates of Mount Angel Abbey in Oregon in 1995 just after the Community moved to North Dakota at the invitation of the Diocese of Fargo, where they settled first in Warsaw, before relocating to the former ND State School of the Blind in Bathgate in 1999. Jack’s remarkable faith was always apparent—whether it was in forging a bakery, a new publishing house or tackling the remodeling and maintenance of a hundred-year-old building. He was a Jack-of-all-Trades and truly a master of asking the right questions of anyone who might know more than he did on the topic at hand.

He is survived by his wife Jean Ann; his children Fr. Peter Sharpe, Joseph (Danielle) Sharpe, Roseanne Sharpe, Nathaniel (Martha) Sharpe; his grandchildren: Elsa, Victoria, Abraham, Jackson, Elanor, Eowyn and Melody; his brother Jerry Sharpe and sister-in-law Laurie Sharpe, and nieces, Ashley and Jenne; members of the Bethlehem Community—and countless friends. He is preceded in death by his parents and brother, James Sharpe.

Faithful Catholic and family-man, lover of fireworks and hospitality to children, families and all those who serve, Jack was a friend to any who received him—and as part of that Cloud of Witnesses, his love and watch-care is yet felt.

To order memorial trees or send flowers to the family in memory of Jack Sharpe, please visit our flower store.