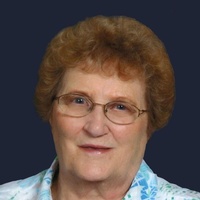 Iris Ann Fischer, the daughter of Eugene and Mary Ann (Meyer) Fischer was born on July 25, 1932 at Langdon. She attended schools in Mount Carmel and St. Alphonsus in the Langdon area. Iris was united in marriage to Lyle James Lothspeich on June 21, 1955, at Our Lady of Mount Carmel Catholic Church. They made their home in Langdon where she worked at various jobs including nursesÃ¢â‚¬â„¢ aide, reception/dental assistant and paraprofessional at the Langdon Area Elementary School. Her most important job was being a devoted wife and loving mother to five children. Iris liked to sew and bake; she was known for her delicious peach pies and homemade caramel rolls. She enjoyed watching her grandchildrenÃ¢â‚¬â„¢s sports and activities. She was active in the St. Alphonsus Catholic Church, Altar Society, Catholic Daughters and past member of the Cavalier County Memorial Hospital Auxiliary and the American Legion Auxiliary.

Mass of Christian Burial will be held Tuesday, October 23, 2018, at 2:00 p.m. at St. Alphonsus Catholic Church in Langdon, ND. Visitation will begin at 12:00 p.m. until the time of the service at the church on Tuesday with a 1:00 p.m. Rosary. Burial is at Calvary Cemetery in Langdon.

To order memorial trees or send flowers to the family in memory of Iris A. Lothspeich, please visit our flower store.