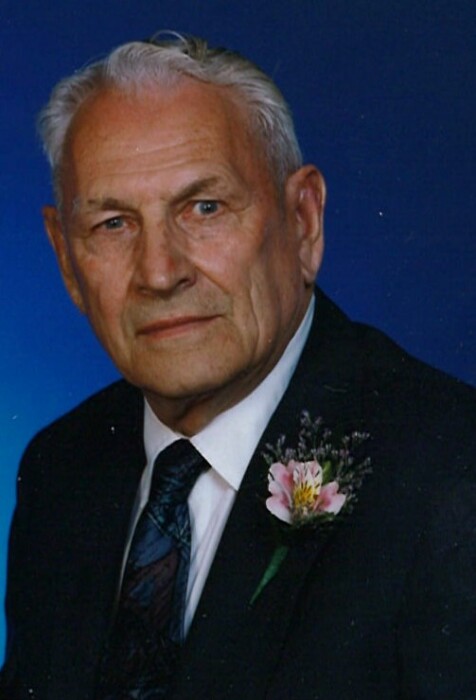 Herb Vosper, age 96, of Neche, ND died on Monday, March 15th at the Luther Memorial Home in Mayville, ND.  Herbert Paul Vosper was born October 6th, 1924 to Roy and Ruth Vosper.  He grew up and attended school in Neche, and then served two years in the military (Merchant Marines).   On May 6, 1947, Herb married Ramona Symington in Hallock, MN.   He farmed in the Neche area for many years with his beloved brother Wes.  Herb also had a Rupp dealership and sold snowmobiles, motorcycles, mini-bikes and go-carts.  He was active in the community with him being on the Neche Fire Department and also serving as fire chief.  Herb also was the mayor of Neche for several years.

When he retired in the early 1990s, Herb continued to stay busy restoring antique tractors (usually red) and then entering them in numerous parades and events around the area.  One of his greatest joys during his later years was to have his family and friends drive his beautiful tractors in a local parade or celebration.  His favorite celebration was the Pioneer Machinery Show that is held near Cavalier, ND where he won many “best of show” trophies for his tractors. During his last days on this earth, Herb stayed true to himself with him loving visits from his family and friends, drinking lots of Pepsi and also joking with the nurses that were taking care of him.

A memorial service will be held on Thursday, March 25th, 2021 at 10:30 a.m. at the Bathgate Presbyterian Church, Bathgate, ND. Visitation will be on Wednesday, March 24th from 5:00 p.m. to 7:00 p.m. at the Askew Funeral Home, Cavalier, ND.  Masks are recommended. In lieu of flowers, please make a donation in honor of Herb to the Pembina County Historical Society (Pioneer Machinery Show) or Hospice of the Red River Valley.

To order memorial trees or send flowers to the family in memory of Herbert P. Vosper, please visit our flower store.