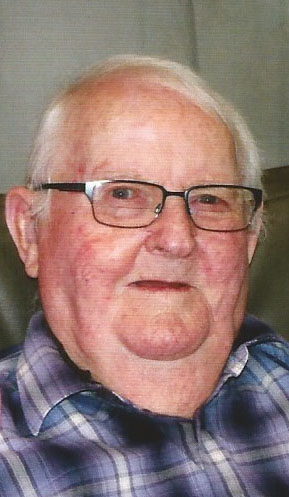 Harland Johnson, 89, of Osnabrock, ND, passed away February 23, 2020, at Lifecare Greenbush Manor in Greenbush, MN, where he had resided for the past 4.5 years.

Harland August was born October 4, 1930, in Osnabrock, ND, to August and Ella (Tollefson) Johnson. He grew up and attended school in the Osnabrock area, graduating from Osnabrock High School in 1949. Harland and Grace Dammen were united in marriage on October 30, 1954 and were married for more than 65 years. To this marriage they added three children, Lana, Tab & Jay, to make up their wonderful family. Harland was a small grains farmer his entire life until retiring. After retiring from farming, he  helped Tab and Jay on the farm as long as he was able. He and Grace spent 20 winters in Bullhead City, AZ, after retiring. In September of 2015, Harland and Grace moved to assisted living in Greenbush to be closer to family following Harland’s stroke in December of 2013. We are so thankful that after his stroke, we were able to have him for another 6+ years.

Harland was very involved in the school and community. He was the Osnabrock Orioles basketball scorekeeper for many years throughout the 60s and 70s, bus driver for many years, and also the school janitor. He was a member of the Dovre Church council and Osnabrock school board. He was president of the Osnabrock Elevator Company when it burned in 1976. He was also a member of the Knights of Pythias Lodge, a director of the North Dakota State Barley Show, and a trustee of the Osnabrock Volunteer Fire Department.

Harland always loved to see his children and grandchildren. He followed them in sports or whatever they were interested in. He was a great dad and grandpa and taught his grandkids how to drive, play cards & dice, and always had time for us all!

The family of Harland Johnson wishes to thank Maple Manor in Langdon, Osnabrock Living Center, Lifecare Greenbush Assisted Living and Greenbush Manor for the wonderful care given to our husband, dad, and grandpa.

A memorial service for Harland will be held at 1:00 p.m. on Friday, March 6, 2020, at Brooks Funeral Home in Langdon, ND. Visitation will be one hour before the service with a reception following the service at the funeral home. Burial will be at a later date at Union Cemetery in Osnabrock.

To order memorial trees or send flowers to the family in memory of Harland A. Johnson, please visit our flower store.