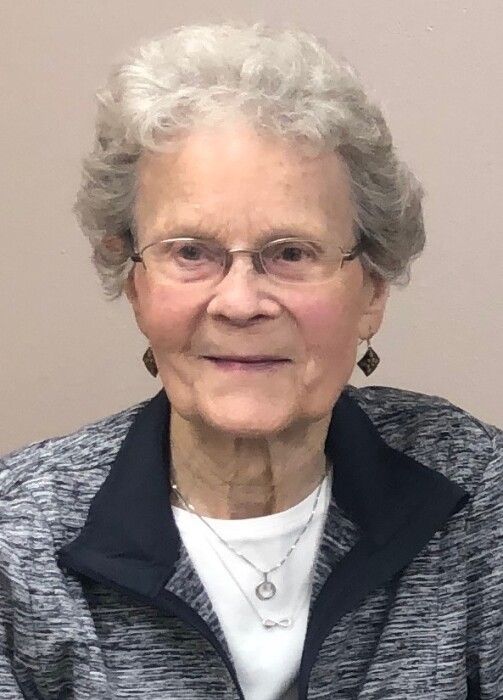 She graduated from high school from Gardar, ND and Park River Ag School for business. After graduation she was employed at the ASCS office in Cavalier.  Goodie moved to California in fall of 1943 and worked North America Aircraft till the summer of 1944.

Goodie was married to Russell J. Anderson on October 22, 1944.  They celebrated their 75th wedding anniversary this past year.  After their marriage they moved to California and she worked at Signal Corps until after the war and at the Bank of America.  Russell and Goodie then moved back to North Dakota to farm.  She then worked as a bookkeeper at the Hensel Elevator for 10 years.

Goodie was passionate about baking and cooking, she was famous for her homemade bread, “Grandma Goodie Buns” and Sunday morning pancake breakfast. She enjoyed sewing, crafts, wood carving, gardening, flowers and her various women’s groups in Hensel, ND and Mesa, AZ.

Goodie and Russell enjoyed traveling after their retirement, especially to Iceland because of their Icelandic heritage.  They spent 25 years going to Arizona and became a part of the Trail Riders Ranch, Mesa, Arizona. Their friends at Trail Riders were very special to them.

Goodie was a resident at Borg Memorial Home for the over the past 2.5 years. Her family is very appreciative of the care, kindness and love that was shown during her stay with them.

Preceding her in death were her parents, and siblings, Oliver Johnson, Victor Johnson and Lillian Johnson.  She has also been preceded in death by many other relatives and friends.

Due to Covid-19 restrictions there will be a private funeral service with plans of a celebration of her life at a later date.  The family requests in lieu of flowers, memorials be sent to the Borg Memorial Home, Mountain, ND, United Lutheran Church, Cavalier, ND. or the Pembina County Memorial Hospital Foundation, Cavalier, ND.

To order memorial trees or send flowers to the family in memory of Gudrun "Goodie" Anderson, please visit our flower store.