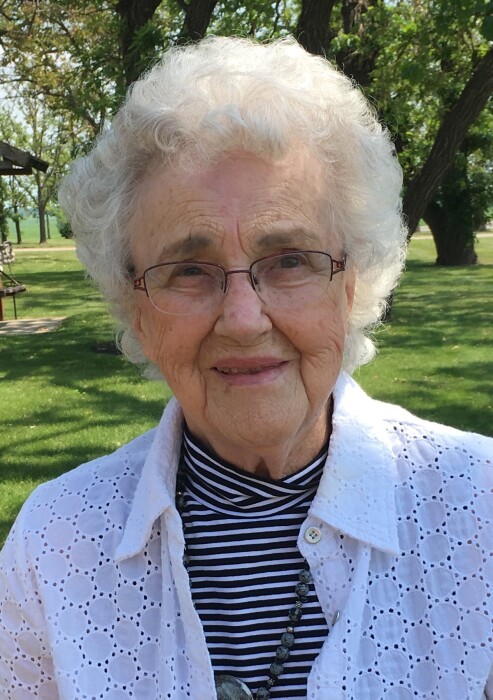 Grace Eleanor Kemp was born November 7, 1924 on the Kemp farm near Hamilton, ND, to Wallace and Merle (Willis) Kemp. She attended country school and graduated from Hamilton High School. She then completed her studies to become a registered nurse in 1946 at the Deaconess School of Nursing in Grand Forks, ND, through the Public Health’s Cadet Nursing Program.

The following year, on June 16, 1947, she married Marvin Gunderson of Hoople, ND.  They settled in the Bathgate area to farm. During the early years of their marriage they spent a few winters in Seattle, WA where she worked as a registered nurse. Later she continued her work as a nurse at the Pembina County Memorial Hospital for many years. Grace and Marvin later made their home in Cavalier, ND, before moving to the Borg Memorial Home in 2013. Marvin was the love of her life and they celebrated over 71 years of marriage.

Grace loved nursing, flowers, and china painting. After raising her family, she devoted her time to her large flower garden. She also learned to china paint and created hundreds of beautiful pieces for herself and her family and friends.

She is survived by her daughters: Barbara (John) Crabtree and Marilyn Stegman; grandchildren: Ashley Crabtree, Bryce (Tiana) Crabtree, and Eric (Pam) Stegman; great-grandsons: Jackson and Aiden. Also surviving are many nieces and nephews and good friends.

Due to health conditions during the coronavirus pandemic, the family has decided to have a service to celebrate her life at a later date. Grace, also with Marvin, will be interred at the Cavalier Cemetery. Memorials are preferred to the Bathgate Presbyterian Church in care of Karen Morrison 14268 102nd St NE, Neche, ND 58265.

To order memorial trees or send flowers to the family in memory of Grace E. Gunderson, please visit our flower store.