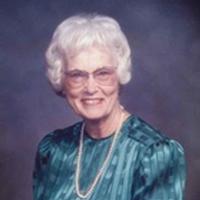 Gladys Anne Nelson was born December 2, 1919 to Henry and Bertine Nelson at Osnabrock, ND. She graduated from Osnabrock High School in 1938. Following high school, she attended Interstate Business College in Fargo, ND. She worked for the county auditor until the USA entered into World War II. Gladys worked at the War Department in Washington, D.C. during the war. On July 31, 1946, she married Richard Lorenz at St. Alphonsus Church in Langdon. She worked for a number of years at the ASCS office (now Farm Service Agency) in Langdon.

Gladys and Richard lived on their farm northwest of Langdon. They were the loving parents of three sons. During the winter months, Gladys and Richard lived in Mesa, AZ for many years and enjoyed the weather and family who visited often. Gladys loved to golf and sing in the church choir. She was a member of the United Lutheran Church in Langdon.

Services will be held at 11:00 a.m. on Wednesday, January 20, 2016 at United Lutheran Church in Langdon, ND. Visitation will take place from 5-7:00 p.m. with a 7:00 prayer service on Tuesday, January 19, 2016 at Brooks Funeral Home in Langdon and for one hour prior to service time at the church on Wednesday.

To order memorial trees or send flowers to the family in memory of Gladys Lorenz, please visit our flower store.