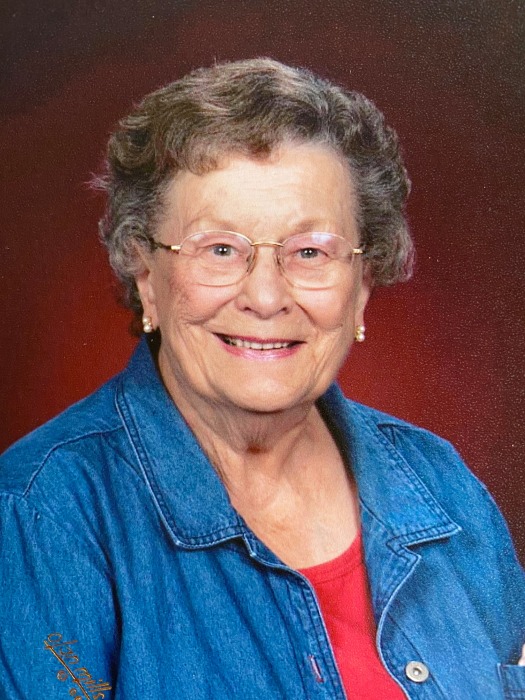 Dorothy Marie Schefter was born October 30, 1922, at Mt. Carmel, ND, to William and Katherine (Kartes) Schefter. She was the last survivor of 10 children. Dorothy grew up and attended country school near Mt. Carmel then attended school in Dresden and graduated from Langdon High School in 1940. While attending school in Langdon, she worked at the Borusky Hospital. On November 4, 1940, Dorothy married Raymond A. Muhs in Mt. Carmel. They began farming together in Langdon Twp.; later, they added the home place in Elgin and Waterloo Townships. To this union were born six children: David, William, Linda, Mary Beth, Robert, and Ronald.

Over the nearly 60 years of marriage, Dorothy and Raymond were true partners in the farm and raising their children. Dorothy was also busy with being a 4-H leader of the Durum Queens and a charter member of the Busy Matrons Homemakers Club. They traveled extensively, including to the Caribbean and Europe. They were both very involved with Farmers Union on a state and national level as well as district politics. Their involvement in St. Alphonsus Church was also important to both of them with Dorothy being active in the altar society.  With retirement in 1992, they began traveling to Texas to spend the winter months. After Raymond died in 2000, Dorothy continued the trek to Mission, TX, for several years. In 2013, she entered Maple Manor Care Center in Langdon.

A private Mass of Christian Burial will take place at 1:00 p.m. on Saturday, May 16, 2020, at St. Alphonsus Catholic Church in Langdon. It will be live-streamed on the St. Alphonsus Church's website at www.stalphonsuslangdon.com  and on Askew Funeral Home’s Facebook page.  Burial will be at Calvary Cemetery in Langdon.

Memorials are preferred in lieu of flowers.  They may be sent to the Cystic Fibrosis Foundation, Maple Manor Care Center, or Calvary Cemetery in Langdon.

To order memorial trees or send flowers to the family in memory of Dorothy M. Muhs, please visit our flower store.