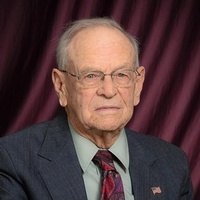 Donald was born September 2, 1927, to Albert and Delina (Beaulieu) Borho in Langdon. He grew up and attended school in the Langdon area, graduating in 1946 from St. Alphonsus. Don and Doris Schneider were united in marriage on August 1, 1951 in Mt. Carmel, ND. In 1952, Don entered the US Army where he served in Okinawa until 1954 when he was honorably discharged. Don and Doris raised their family and farmed the Heapy farm south of Langdon. Don also worked for the Corps of Engineering as a surveyor, hauled government grain, blew snow for many years with the plow custom built by Richard Otto, and was a custom harvester for 30+ years. In 1997, he and Doris moved to Langdon. He was a true steward of the land, and although he worked hard and long, it was a labor of love. Don was still actively engaged in farming and went to the farm almost daily year round. He enjoyed golfing, gardening and always had some project going on. Don was a member of St. Alphonsus Catholic Church, Knights of Columbus, Langdon Eagles Aerie #3454, American Legion, and Langdon Country Club.

To order memorial trees or send flowers to the family in memory of Donald Borho, please visit our flower store.