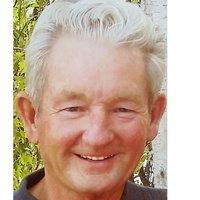 David was born on July 11, 1930 in Grafton, ND to James L. Symington and Kathleen (Park) Symington. He attended school in Neche, ND graduating in 1948 and then went on to college at the North Dakota State School of Science in Wahpeton, ND graduating with a Refrigeration and Cooling degree.

David married Darlene Johnson of Cavalier, ND on November 25, 1956. His three children were born to this union - Dyana, David and Darci. David was a life long farmer at Neche, ND and ran the Symington Insurance Agency with Darlene. On November 19, 1983 he married Barbara Kaluza. David and Barbara enjoyed summers on the farm in Neche and winters at Venture Out in Mesa, AZ for 35 years. David was an avid fan of ALL sports and participant of many. He played softball his early years and was also on the Venture Out Softball Team in Mesa (1987 Champions!) He found his passion in tennis at Venture Out and spent many years on the tennis court, playing until he was 82 years old. He was an excellent pool player and could beat anyone. But he was also the most patient pool instructor you could find. His most recent sport was bocce ball - again excelling, but a gracious winner and excellent teacher. He had a kind heart and free spirit and was such a social butterfly. He was easy to love, which was evident by the wonderful care he received the last months of his life from caregivers Sandy, Minda and Sandra. They were truly his "Angels on Earth" and the family would like to thank them for their love of him.

Preceding him in death were his parents, his sister Beverly Sehler, brother James Owen Symington and nephew Scott Symington.

Funeral service will be held Thursday, September 6, 2018 at 10:30 a.m. at the Trinity United Methodist Church, Cavalier, ND. Visitation at the church for one hour before the time of services. Burial will be held in the Bruce Cemetery, Neche, ND.

To order memorial trees or send flowers to the family in memory of David Park Symington, please visit our flower store.