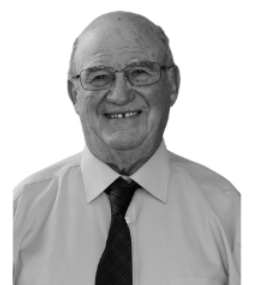 Dale was born on May 28, 1938, at North Carlisle Township to Cleora (Stratton) and John O’Hara. He grew up in Hamilton, ND and graduated from Hamilton High School in 1956. After high school he enlisted in the United States Navy, where he served 4 years. Following his service in the Navy, Dale returned to Hamilton, ND where he married Sharon Keena. Dale and Sharon raised their 4 children in Cavalier, ND. Dale was employed by Gregory Ford, the Leonard Schwartz Farm, and eventually at Pembina County Memorial Hospital and Wedgewood Manor, where he was employed 32 years before his retirement in 2001. Following retirement, he worked for American Crystal Sugar Company and North Star Coop.
Dale served many years on the Pembina County Fair Board, Northern Valley Homes Board, and Pembina County Memorial Hospital and Foundation Board. He was also a volunteer with the Cavalier Ambulance service. Dale enjoyed curling, fishing, golfing, traveling and any sort of sporting events where
he could cheer on his grandchildren.
Dale is survived by his wife, Sharon (Keena); son, Jeffrey (Patricia); daughters, Lori (Terry), Janet (Scott), and Joan (Jarrett); and grandchildren Paige (Colby), Abbie (Dustin), Taylor (Dustin), Maggie, Maris, and Emmitt; and great-grandsons Cooper and Stratton. He is also survived by sisters-in-law, Maxine
(Marvin) McIntyre and Shirley Keena. Many nieces, nephews and cousins also survive.
Preceding him in death were his parents, brother Thomas, sister Helen, sister and brother-in-law Audrey and Dale Rowe, brothers-in-law, Bill Keena, Rodney Keena, and Ray Keena and sons-in-law, Ian Miller, and Stuart Swartz.

To order memorial trees or send flowers to the family in memory of Dale O'Hara, please visit our flower store.
Open