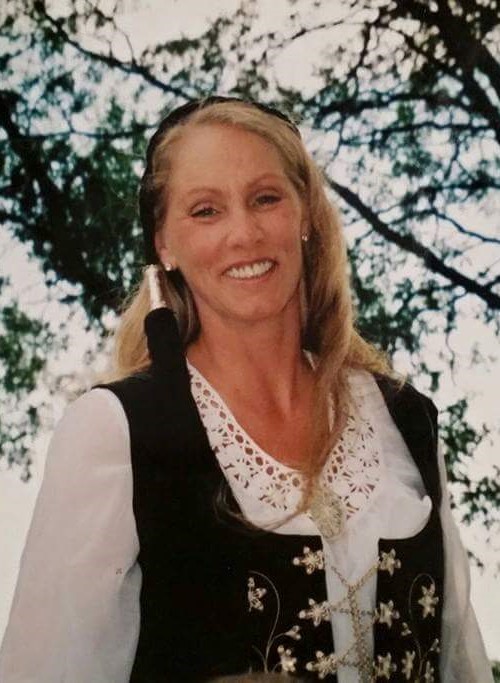 Björk Eiríksdóttir Olafson, 61, of Edinburg, ND, passed away June 5th, 2021, at her rural Edinburg home. Björk was born November 6th, 1959, in Reykjavík, Iceland to Eiríkur Ólafsson and Margrét Ólafsdóttir Hjartar. Björk attended schools in Reykjavik. During school, she was a track star in high jump and javelin.  After graduation, Björk worked in various career paths, ranging from working at DHL, The Lions Club International, as an accountant for various companies, to working in the catering business and serving guests at the residence of the President of Iceland. Björk married Gunnlaugur C. Nielsen “Gulli” on August 26, 1995. Shortly after their wedding, Björk, Gulli and their 3 children moved to Namibia, Africa. Björk spent most of her time volunteering for the underprivileged and helping with community events. Gunnlaugur C. Nielsen died on August 23, 1998, after which Björk and her children moved back to Iceland. In 2003 Björk and Curtis Olafson met at the residence of the former President of Iceland, where Björk was working during a hosted luncheon for a group from the Icelandic Communities Association of North Dakota.  Shortly after they met, Björk & Curtis started their  long-distance relationship. Curtis & Björk exchanged visits between Iceland and North Dakota several times. In 2004 Björk and 2 of her 3 children moved to North Dakota, and on July 31st, 2004, Björk and Curtis were married during the Deuce of August Icelandic Celebration.  During her time in ND, Björk worked in financial services and accounting. In her early days, she was very involved with the Icelandic Communities Association as the treasurer and she frequently volunteered during the August the Deuce celebration. Björk was an incredibly strong woman who had a heart full of  love. She would always think of others before herself and she took joy in helping others and making people happy. Björk took pride in her cooking and those who were served her food know she was a gourmet chef. She also enjoyed reading and amassed a grand collection of books. In later years, she was a prolific knitter, most often making handmade garments for her favorite people-infants and toddlers. She was a wonderful woman of many adventures and had so much to share based on her life experiences. Björk showed great strength and courage while often facing serious health challenges.  She was diagnosed with cancer three times during her life, including an early bout of cancer while working very hard to raise three children on her own as a widow.  She was successfully treated for lung cancer with a challenging surgery at Mayo Clinic in 2014, and later treated at Mayo Clinic in 2019 for a second diagnosis of cancer.   Surviving Björk is her husband, Curtis Olafson, children, Heimir (Kólbrún) Heimisson, Iceland, Linda (Thomas) Frey, Harrisburg, SD, and Einar Nielsen, Iceland; step-children, Renata (Greg) Selzer, West Fargo, ND, and Drew (Samantha) Olafson, Cavalier, ND; grandchildren: Kristjan, Natalia, Gunnar, Clara, Gavin, Halle, August, Iris, Anita, and Lillia: sisters, Margrét Eiríksdóttir, Edda Eiríksdóttir and Sæunn Eiríksdóttir, all in Iceland.  She was preceded in death by her parents, her late husband Gunnlaugur C. Nielsen, her brother Þórður Eiríksson, and sister, Sigríður Eiríksdóttir.       A visitation will be held at the Askew Funeral Home, Cavalier, ND, on Wednesday, June 9th from 5-7 PM.  A celebration of her life will be held at the Mountain Community Center, Mountain, ND, on Thursday, June 10th, at 2 PM.  Björk will be brought home to Iceland for a funeral service and burial at her final resting place.
To order memorial trees or send flowers to the family in memory of Bjork Olafson, please visit our flower store.